When you hear the category “sci-fi,” Star Wars/Trek, Doctor Who, Twilight Zone, Interstellar, Hitchhiker’s Guide to the Galaxy and other such movies or books may come to mind. The thing that’s common with almost all of these is that they may be sci-fi, but they also fall into the “fantasy” category. These stories never happened and could never happen according to our current time and knowledge of science and the universe, which makes them very unrealistic, thus fantasy. Which is one of the reasons why The Martian is cool. It’s unique because it fits into the “sci-fi” category but doesn’t fall in with “fantasy.” It’s totally fiction, incredibly scientific (like only-geeks-get-it scientific), BUT! It’s totally realistic. This is no fantasy … This is it. This is what I’m talking about. This is sci-fi.

Here is a short summary (I did my best, as always, to avoid spoilers) of the story The Martian that fits both the book and movie:

Unfortunate astronaut Mark Watney is left alone on a life-threatening death storm on Mars with limited food supplies and resources, no Mars Ascent Vehicle, and numbered days of life in front of him. His Ares Mission III crewmates have abandoned him, thinking he was dead. Death seems unbearably inevitable, but luckily, Mark’s humor, optimism, and mere scientific wit keeps him from giving up as he fights for life on the barren wasteland of Acidalia Planitia and struggles to regain communication between himself and NASA on Earth.

Now for some reviews/critiques. The book comes first, because … well, because it came first. 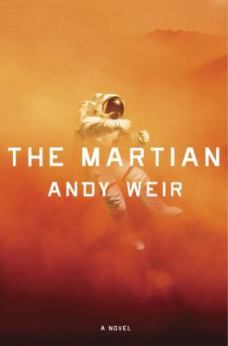 A little information on the background of the book first will bring more to life how sophisticated and realistic the story really is. The author of The Martian, Andy Weir (what happened to the “d” in the last name?), is a software engineer, a hobbyist of the history of manned spaceflight, a Doctor Who freak, calls himself a “space nerd.” Guys, this is a book written by a NASA scientist! The technical stuff in the book is information that only the high-tech geeks and astronauts will get. Weir said in an interview that he loves keeping up with the current space research and at some point came up with an idea for an astronaut that got stranded on Mars. He wanted to be as realistic as possible and says that all the facts in the book about Mars are accurate, as well as the physics of space travel. He actually had to write his own software to “track constant-thrust trajectories” (see, I don’t know what that means). How did the book get published? Weir says he merely uploaded to Amazon via CreateSpace as an eBook for the minimum price like any ol’ indie publisher and slapped a stock photo of Mars on the front. He got a ridiculous amount of readership; soon the publishing company came knocking on his door, and, later on, he was asked permission to make his book into a movie. Wow. CreateSpace, here I come.

The story in the book is mostly a bunch of log entries that the Mark Watney keeps on Mars and instead of titling each entry with “Day 7”, he uses the term “sol” instead. A sol is basically a day on Mars (for perspective’s sake, there are 668 sols in a year and each day is 39 minutes longer than a day on Earth) with 549 sols altogether on Mars (not 549 entries). That’s a jaw-dropping lot of time. Of course, the whole book isn’t all just entries by Watney, and it switches to third person pretty often when the NASA people on Earth take the spotlight in the story here and there.

There’s a lot of humor on Mark Watney’s part, and he’s quite an optimistic fellow. No wonder he could get by on Mars alone with a personality like that. If his personality was altered towards the pessimistic side, he probably wouldn’t make it psychologically. His character helps make the story lighter and doesn’t seem so hopeless as it would be otherwise. Bad language is spoken fluently in the book (I guess it’s supposed to be part of the humor), and you get to see the “f” word on every other page or so, and unless you’re very sensitive to that sort of thing, the story is worth the skimming those cuss words.

One of my favorite things about the story was the reverence of duct tape and a very dangerous RTG (radioisotope thermoelectric generator) that sends out such strong radiation that it was immediately buried by NASA as soon as they arrived on Mars. Watney needs a way to stay warm in the rover on the way to the MAV, so he finds the site and digs up the heat-giving RTG to put in the back of the rover. As he says in the book, he might get so much cancer that the cancer cells might get cancer, but hey, he’s on Mars. What else ya gonna do?

Movie review now. (Or you can say critique, which sounds more professional.) Directed by Ridley Scott and starring Matt Damon, it was released on October 2, only a few days after the day we found water on Mars. As the review in New York Times pointed out, this could have been strategically planned between the NASA journalists or scientists and the movie director, or it could be some crazy coincidence. Anyways, the movie wasn’t worse or better than I expected; it was perfect. It flowed exceptionally well, was generally accurate to the book (except for the storm that hits Watney while he’s in the rover on his way to the MAV in the book), had moderate action without violence, and the overall feel of the movie put on a hopeful and optimistic look into the future of international space travel; you get to see Watney being cheered on not only in America, but internationally. The Chinese actually almost sent out a launch of their own that they’d been working on for ten years to help an American astronaut and they celebrate with NASA in the end. The next NASA launch, mission Ares IV, includes not only Americans but also Chinese.

Since the book was mostly written in log entries by Mark Watney, thus first person, the movie had some of the logs as video cam style, which is ideal for a movie since it’s on the screen. These video recordings of Mark Watney talking at the cam are few compared to the written log entries in the book, and the rest of the story is told being portrayed by screen as Watney goes about his routines on Mars. I thought it was very interesting to actually see in the movie what I was trying to understand in the book. When I read about the whole technical chemical process of converting oxygen to hydrogen or something like that to get fire, I couldn’t grasp it enough to try to visualize the book character actually doing it. When I watched it in the movie, however, I could understand how it really was supposed to look, and how realistic it was.

The film score was by Harry Gregson-Williams, the same composer for the Narnia movies. The soundtrack wasn’t amazing, but it did its job well: conveying the right emotion for each of the scenes. There was a part in the movie while showing shots of Mars’s surface where the music sounded similar to Hans Zimmer’s track from Interstellar.

As a (personal opinion) side note, I’m glad they put in the Iron Man reference from the book and disappointed that they didn’t play “Stayin’ Alive,” a song from Commander Lewis’s ’70s collection that Watney picks as his hypothetical theme song.

Overall, the film was very compelling and well done with an optimistic message, good characters, and the right amount of drama and action, compared to other space movies such as Gravity, which was too intense even on our small screen, and Interstellar, which is more of a fantasy sci-fi and dealt with a plot in the future of Earth and space travel. The Martian is a great story about one man, “marooned, but not alone.” He’s millions of miles from home by himself, and just manages to survive physically and psychologically. But Earth is still out there and beginning to track his progress on the barren planet little by little and the best brains in NASA synergize together to think of a way to bring Watney home.

I bought this little orange book at Barnes and Noble merely because I had nothing else to read. I had no idea it was going to become my favorite realistic sci-fi book and a classic movie to see again and again for years to come. What about you? Have you seen the movie or read the book? What did you think of the story/characters/the overall feel? I’d love to hear your thoughts and what you liked and didn’t like about it.

4 thoughts on “The Book and Movie Review: The Martian”