“Actions speak louder than words.” I’m sure we’ve all heard that phrase before. However, today I’m going to switch some words out to get: “Pictures speak louder than words.” As writers, anything can pique our curiosity, spark some inspiration, and get our minds whirring. Our observations don’t only cause us to think, “Oh, that’s odd and interesting,” but will also make us wonder, “Hey, what a good story/character idea.” These little sparks of inspiration just come from life experience, but good story starters, character ideas, and dialogue bits can also come from pictures … any pictures. 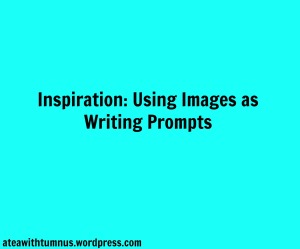 There’s something about images that I love … maybe it’s capturing the moment so that you can look and remember for the rest of your life. Maybe it’s just taking the photo or sketching the design that gives you a good feeling that you’ve made the world just a little more beautiful. I also love pictures or images because they stimulate my thinking, particularly if it looks like a shot out of a book or a movie, for example, a person, a setting, a castle, a tree, anything that makes me think, “Hey, that’s exactly what my character looks like,” or “The way that brick road looks, it’s exactly what I was picturing for the road in my story.”

Pinterest is a great source for these inspiration images and they are actually very helpful. I have several boards of only images because really, they speak louder than words: one for characters, another for settings/places, and one for plot prompts. My plot prompt board consists not only of images, but also of word prompts, which are pretty popular. These word prompts are made specifically for writers, and though these ideas aren’t original (hey, so many people see them on Pinterest and pin them) but they can stimulate orignal ideas. Whether the prompts are dialogue, a one-liner plot, pictures of people and fantasical creatures, or just any image that causes you to think, “A-ha!“, these little things can spark inspiration in the minds of any writer.

The downside for me in pinning these little inspiring prompts, is that they just add to my ever growing pile of story ideas. It is tempting to take a break from your main writing project and start writing out a storyline based on one of those epic writing prompts, even if it’s just a short story. (But taking a break and writing a short story can be a good thing: Check out this epic post.) But using these picture inspirations can also help you in your WIP, such as people that look like your character, quotes or dialogue that reminds you of what a character says at a certain point in your story, or a picture of a setting that looks just like somewhere you’ve already created in your mind. I also have a couple boards that are overall inspiration specifically for my current writing projects. While pinning things for your stories, however, if you haven’t published that story yet, initial your character’s names, names of places, and any original ideas of your own that you don’t want people stealing (someone once pinned a pin of mine with my character’s name. For then on I just called her Z.)

So, that said, here are several writing prompts that I found exceptionally inspiring, starting with the graphics. I hope that maybe one day I’ll be able to create beautiful graphic images just like these. Now for some writing prompts using words. Since these are obviously not original, they’re small enough so that every writer has a different approach to each prompt. Every story based off these will be different because these prompts spark original ideas. Most of these are characters and settings, but they’re pretty good story inspiration. Some are real photography.

(I’m pretty sure this is a real photograph.) These are only a few compared to all of the awesome inspiration I’ve found. So how about you? What inspires you the most as a writer? What are your favorite sources for inspiration in words, images, or anything? Have these pictures sparked any inspiration? I love exchanging ideas with others. Good writing to you.