I hope you aren’t sick of Star Wars Yet, because there’s more coming! (Is there any such thing as being “sick of Star Wars” anyway?) Unfortunately, this post has spoilers, but the high box office records tell me that I shouldn’t worry too much about that at this point. 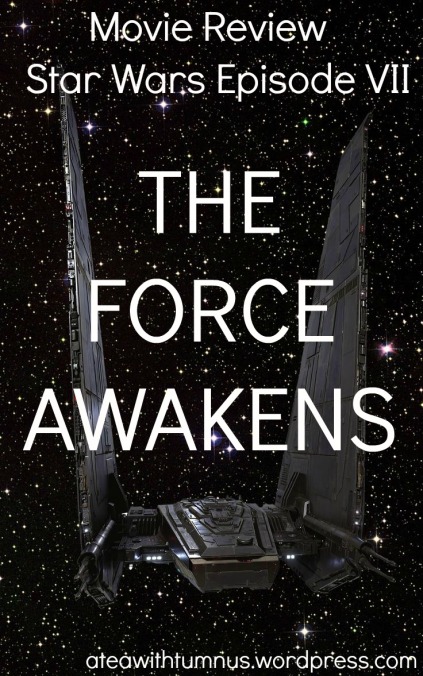 Because absolutely no one knows this, The Force Awakens was released on December 18, 2015, directed by J. J. Abrams and starring Daisy Ridley, Adam Driver, John Boyega, and Harrison Ford. And we’ve also got Leia, C3PO, R2D2 and a new little droid BB-8. The cast is, therefore, new and old, as was everything else about the movie. Below is a short summary, and then I’ll get to my review.

Luke Skywalker is thought to still be the last Jedi in the galaxy. This is unfortunate because he is desperately needed to help the Resistance to (you guessed it) resist the First Order, which is headed by the evil Supreme Leader Snoke and his temperamental apprentice, Kylo Ren. What’s worse is that Luke has basically cast himself into exile years ago, and the Resistance has a map to find him, but is missing a piece; can they find Luke, or will the First Order stop them? However, it looks like we have several New Hopes: Rey, a strong young Scavenger, Finn, a Clone who decides to switch sides, and BB-8, a little droid who carries the section of the map the Resistance is looking for.

After the bombing of her small village, Rey finds herself leaving her home planet Jakku in the Millenium Falcon, with Finn and BB-8 in tow, with the only task of returning the droid to its rightful owner, a Resistance pilot named Poe, whose job it is to take the map in BB-8 to the Resistance. Unfortunately, even with the assistance of Han Solo and Chewie, Kylo Ren and Snoke have found a way to blow up Resistance base planets from their new “Death Star“ and, simply put, Rey finds herself more involved with the star wars than she’d ever dreamed.

Now for the main review.

First of all, the movie was excellently done. This is the 21st century, and it is no easy task to create a whole new Star Wars movie, particularly if it’s going to be influenced by the fans; that’s where your money is coming from after all. Thankfully, however, J. J. Abrams knew what he was doing and he did it right. He “gave ’em what they came for,” and it was epic. Force was more like the originals compared to the three prequels, particularly with elements of the same soundtrack, several of even the same actors, and a more fun, understandable story; no one even had their limbs violently amputated.

There were also lots of symbolism and parallels between Force and New Hope, making the stories from each very similar, which means Abrams and Gang were successful. Rey is like Luke, living and working for survival out on the desert. BB-8 is like R2D2, “the droids we’re looking for,” are both given an important hologram which starts the whole plot. Snoke and even his theme music resembles Palpatine and Kylo Ren Darth Vader. The Resistance pilots in their X-Wings (which haven’t seen much technological improvement over the last 30 years), bombs down yet another “Death Star.” And on top of it all, you get Han and Chewie back in the cockpit of the Millennium Falcon where they belong. You tell me it’s entirely different from A New Hope. 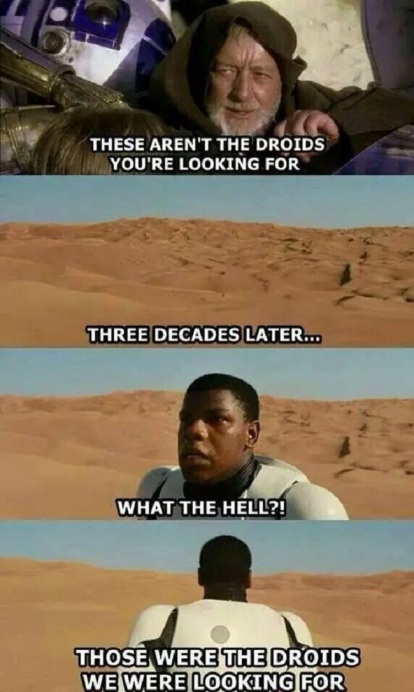 The drama the story created was more melancholy, more depressing. This means it was more realistic, but it struck me as odd to make the feel of the plot very different from the original movies, which are more fun and light-hearted. (At least it’s not as stressful as the prequels.) As for Kylo Ren, lots of people have mixed feelings about him, this “Vader fanboy” with the useless mask who kills his father, Han Solo. You killed Han?! Expect an army of very angry fans. On a sidenote, did anyone else notice that Kylo Ren looks nothing like his parents? He’d look better in a pom-pom beret painting an Italian masterpiece surrounded by Roman architecture, not replacing Darth Vader’s role.

There’s something else, however, that makes Kylo Ren interesting to other people; he’s a very mysterious person. In the scene where he kills Han Solo it could have been inner conflict or all pretend. Once we know the answer, we’ll be able to tell if Kylo Ren is more redemptive than he seems to us already. What exactly is his relationship with Snoke, and why does he adore Vader so much? What about the random temper fits, particularly over reports on Rey (perhaps this means he knew beforehand about the strength of the Force in Rey)?

So, do you have anything to say about the soundtrack? Oh … well … nothing really …

John Williams did it!!! Therefore it is awesome!!! Whether it was nostalgic or not the score was OUTSTANDING!!!

So yes, it was excellent. John Williams also knew what he was doing, as he not only composed new themes (Rey’s Theme, March of the Resistance, Scherzo for X-Wing, etc.) but he also incorporated older, familiar tunes from the original trilogy into the soundtrack for The Force Awakens. On a more personal note, the soundtrack was the main thing that made my experience with Force disappointing, as I was expecting most of the score to be just like the older ones. Several people do actually agree with me on this point, and I have read on other articles that people may or may not have liked how little the older themes were used. Of course, the new themes weren’t bad and were very well done; Rey’s Theme is my new favorite track. But there’s something about the Imperial March and especially the song “The Death Star/The Stormtroopers” and all the other old tunes from the originals that just — for lack of a better term — make Star Wars. The newer themes are nice, but it’ll take a while to get used to and I can’t place them in the same view as the older themes.

Of course, you have the Main Titles and the End Titles (Fanfare) at the beginning and end of the movie that are nearly identical to the rest of the six earlier films, with the Force Theme once in a while, but it’s really not much compared to my expectations. For more on the film score for Force Awakens, check out my post on Constant Collectible, a geek site I am now a contributor for (in fact, you may want to subscribe; there are several other contributors who can crank out some pretty awesome posts on that site).

My personal feelings overall were mixed, but tended to lean towards disappointment. I wasn’t alive when the original trilogy came out and was much too young to see the prequels, but for me, I felt like Force wasn’t nostalgic enough. Eek. I’m a hard fan to please. The things that caused me to think thus had to do with the soundtrack and the drama. I might have even been expecting the same story (yes, my expectations were that high). There’s one other thing that bothered me: Not only is Han dead, but Darth Vader wasn’t even in the movie. This is Star Wars? Without Darth Vader? No wonder I was so disappointed. And Kylo Ren is only cool to me because he reminds me of Loki. But I argue with myself on this point with the defense that you can’t recreate the Star Wars story. Of course it’s going to be different. They did their best. And, frankly, despite mixed negative thoughts, I’m proud of them. Can’t wait for Rogue One.

There is something I have learned from my experience from The Force Awakens: Lower expectations leads to high opinions. Before you see the movie, tell yourself it’ll be horrible, not worth seeing, and read all the negative reviews. Then you’ll see the movie and love it so much you’ll rave about it for the next several weeks. Okay, maybe not, but I’ll try something like that next time there’s a movie coming out I’m really looking forward to. Check out another cool review here and an interview with George Lucas on what he thinks about Force.

And that’s pretty much it. I tried to give this review from an objective perspective, but I thought it would be a good idea to put some of my negative thoughts up, as there probably aren’t a lot of negative ones out there. The movie was very well done, an excellent start for a new Star Wars for a new generation. Kudos to J. J. Abrams, John Williams, and all for beautifully lengthening the story of Star Wars.

So, it’s now time for your thoughts. Did anyone else think the same way I did about the movie? What did you dislike or like about Force? Any agreements or disagreements, rants or raves? Don’t forget to comment below and, as always, may the Force be with you.

The Book and Movie Review: The Martian