In the Star Wars fandom, there are not many who like Episodes I, II, and III as much as the older trilogy and even the new Force Awakens. I find that there are two main reasons for why this is so: 1) The expectations were high and 2) They were poorly done, from the writing to the acting to the overdone CGI. And honestly I don’t know anyone who thinks Jar Jar is funny. Fortunately, however, what makes a “good movie” doesn’t require only good acting, script, and effects. The characters, the plot points, the storytelling are also what makes a movie enjoyable. This goes for the Star Wars prequels; the story quality completely overrides the filming quality in these three films. For reasons I personally can’t understand, the Prequels did the fanbase a lot of damage and nearly gave Star Wars a bad name. 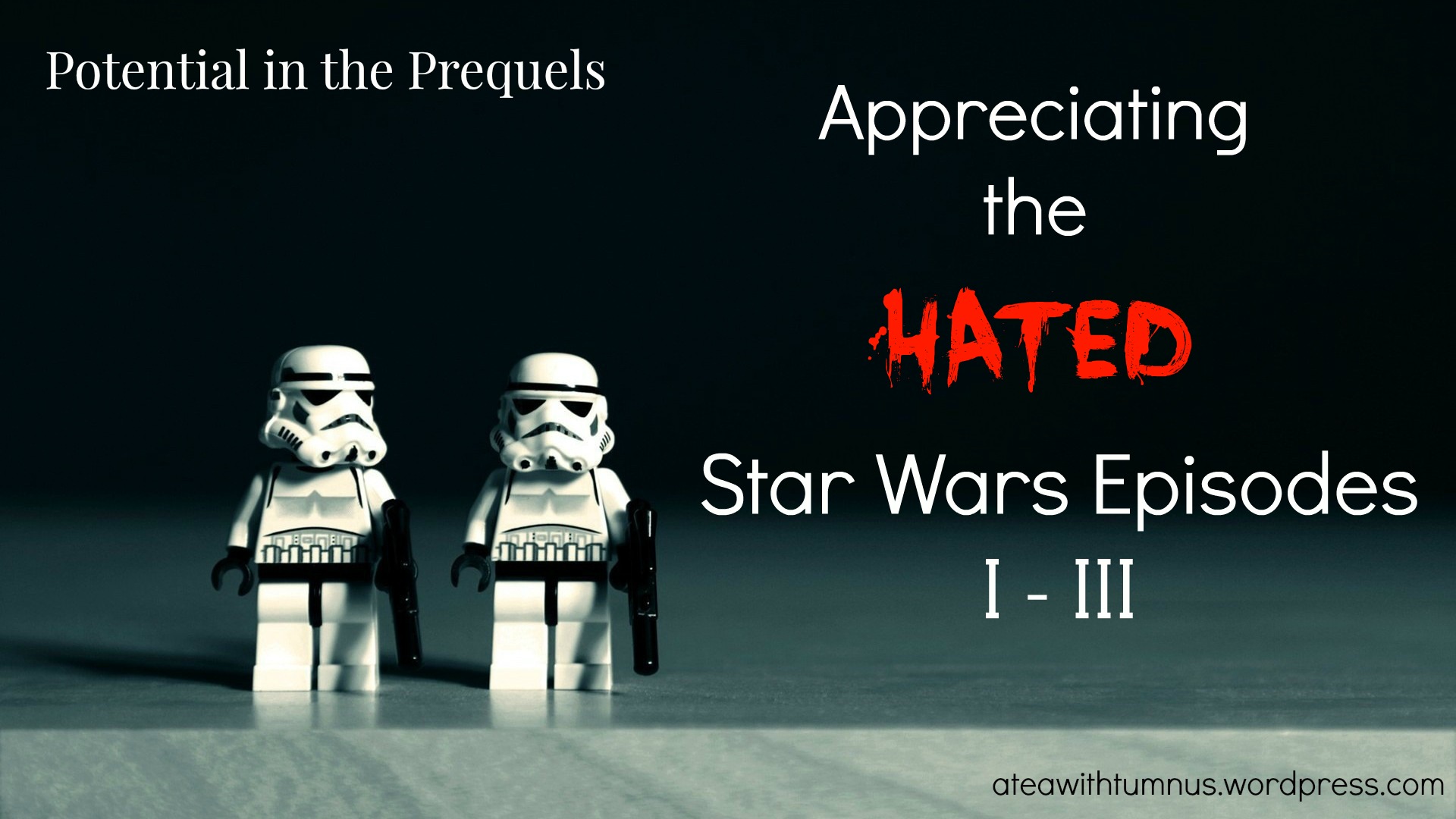 Oh. That kind of Star Wars nerd. Yes, I was not alive to watch all six Star Wars movies as each came out, and I saw all six at once; therefore, all six of the movies were Star Wars to me. Therefore it may be easy for me to say that the Prequels are good. But just because I didn’t go “through the Star Wars experience” doesn’t mean I’m the only one who sees the potential in the Prequels; I’m sure there’s at least something everyone can enjoy in the films. Sure, the originals were better in a lot of ways. But I want to switch perspectives and think for the other side … because there is another side.

The Plot. The plot points are what makes the Prequels. Forget the quality and bad acting. The story (not the script) is one of the main reasons why the Prequels are so amazing to me. We’ve already seen Darth Vader in the original trilogy. Now we get to see how this epic villain evolved, and it is a fascinating story full of struggle, disappointment, temptation, and regret. It’s better than Malefic — never mind. The plot, for all three films, is so intricately interwoven, it’s fascinating.

World Building. The Star Wars universe just expanded big time with the Prequels. New planets and places open up so many possibilities in storytelling. George Lucas added more we never knew about the two sides of the Force. We didn’t know there was ever so many Jedi, enough to create a counsel! Neither did we know the story of the Sith, of Palpatine’s relationship with Anakin and Darth Maul. We get more information on the dogma and order of the Jedi, the way government worked back then in the galaxy. This is the first time we hear terms such as “Master and Padawan,” see Yoda’s fighting skills, a clone army. These details create even more of the universe we left in the original trilogy. George Lucas had lots of fun not only with young Vader’s character progression, but with world building.

Characters. The characters are a big part of the Prequels, as they explain the way the characters are in the original trilogy. They were done nearly perfectly. Now everyone loves Darth Maul with his awesome double-bladed saber (too late, Ren), but he lives only to fight with Jinn and Kenobi before being cut in half. However, I think the most important characters in the Prequels are Anakin, Obi-Wan, and Palpatine.

Anakin’s character must have been the most annoying in Attack of the Clones, what with his using guilt manipulation and the constant whining. But seriously? Is this the only reason you don’t like Anakin? After all he’s been through, and you hate him for whining. It makes him a little immature, I know, but what did you expect of him, to take the harshness of life with constant smiles? Anakin’s life was not a nice one.

“… realistically, [Anakin] should be suffering some level of brutalisation/trauma/depression/PTSD. But rather than addressing any of the above, the movies reduce his would-be legitimate issues with the Jedi to arrogant, teenage sulking.” – David Houghton on GameRadar

Whether we like this or not, these repelling personality weaknesses is what shapes his character; we see how his rebellion grows against the Jedi and he begins to value Padme as more important than his duty as a Padawan.

The third Episode, Revenge of the Sith, is when Anakin’s characterization basically makes the story, as he tries to resist Palpatine’s lures and yet feels undermined and untrusted by the Jedi Council. They both mean good for the Republic, but the Jedi tell him Palpatine plans to destroy democracy and the Republic, when Palpatine at the same time tells him the Jedi mean to take over the Republic. Whoever his master is, Sith or Jedi, Anakin will remain loyal to the Republic. He gets “bullied” into choosing the Dark Side, forced to come to the Dark Side with the Sith Lord Palpatine as his master. This movie was told amazingly well, as far as Anakin’s struggles go.

Obi-Wan gets to do all the cool stuff, after all. He finds Coruscant and tries to figure out who, exactly, ordered to create the Clone army, followed by a skirmish with Jango Fett. He goes to Geonosis to seek Count Dooku and spies on his counsel. He’s the one who gets to train Vader, jumps on the drone, flies to different planets a lot, and distributes the Skywalker twins to their future guardians. And he survives to become the old hermit who trains Luke Skywalker. Ahem. New favorite character, anyone?

Comparison with the Original Trilogy. In his recent interview on what he thought about Force, George Lucas says he doesn’t like “retro,” his reason for disliking Episode VII. He always wants to try something new and different with each new film, and this is exactly what he did with the Prequels. He pulled it off pretty well, just think of all the factors that differentiate the Prequels from the Saga. Yeah.

In comparison to the originals, which had sides of black and white, good against bad, the Prequels have gray everywhere. The “good guys” aren’t completely right and the “bad guys” aren’t completely wrong. The Jedi and the Sith both have their own ideas of power and freedom and Anakin walks between both and is burdened with the experience of trying to choose which side he is on.

The original three also had a very simplistic storyline. So simple, in fact, we could easily follow it without getting lost about what’s going on. That’s always a good thing. In the Prequels, however, there are tons of government issues, a lot of it being just politics talk. Good luck with that … you might want subtitles. This makes for a confusing and very detailed story, but the plot is genius. In fact, once you get the gist of what’s going on, you get pulled into the story; it gets more interesting. You’re not sure what’s good or bad until the end of the Prequels when it all comes together and then it’s mindblowing.

Flashbacks from Saga to Prequels. Now this is some cool stuff. If you watch all six movies in chronological order, you’ll find that you view the original trilogy differently. You see Darth Vader differently because you’ve just witnessed his whole life before. You see Obi Wan differently because he was the cause of Darth Vader’s intimidating appearance—and we also know the reason for training Luke against his own father. We view Luke and Leia differently because they are the children of Anakin Skywalker and Padme. We see Emperor Palpatine differently, and that’s just hate increased. When Obi-Wan tells Luke about his father, we remember the deadly duel on Mustafar. We begin to understand the characters from the original Star Wars movies better. Why? Oh, how would I know.

“[Darth Vader has] seen Luke not as a potential Sith apprentice, but as a way out from beneath the Emperor’s tyranny, and an opportunity to rebuild the Force anew. Luke also represents the chance to regain his family, the loss of which pushed him to his reluctant decision in the first place. … [G]iven his history with the oppressive Jedi, Vader has probably resented the Emperor for a long time, and for very similar reasons – a nice hark back to the idea that one extremism is as bad as another [Jedi vs. Sith] – but only truly manages to break his indoctrination at the end. Because manipulative, abusive relationships are hard to get out of. If all of this had come to pass, we’d have a prequel trilogy that supports and improves the original, rather than sitting separate and contradictory as it currently does.” – David Houghton

The Film Score. Self-explanatory. If you’re going to like anything from the Prequels, it’ll be the soundtrack. John Williams has the power to create emotions through the screen and into our minds, and he did not fail the Prequels with his always amazing score. No matter how well done the movie, if John Williams composed the track, you have good reason to like it.

Sure, the Prequels weren’t perfect. Sure, the acting and writing and Binks were annoying. But put all 6 films together and BANG. You got yourself a story that has already gone down in history. The Prequels are awesome. They don’t compare with the originals, but they did what they had to do: they told the story right and it worked. There’s so much feel at the end of Revenge of the Sith and it makes you just want to sit back and go “WOW” or sit in a corner and cry from the epicness of it all. Open your mind. Search your feelings. *mind trick* The Prequels are amazing.

What are your thoughts on this? What are your reasons for hating or loving the Prequels? The Prequels don’t often get a lot of praise, and for good and bad reasons; your opinions are valued. If you want to read more on this topic, I suggest you read this great article on The Mary Sue. May the Force be with you.

11 responses to “Potential in the Prequels: Appreciating the Hated Star Wars Episodes I-III”