“Ugh. Trying to break the stereotype … but the only weapon I can picture my character using is just a sword. My other character uses a bow and arrow, but everyone’s going to start picturing a guy with long perfect hair and elf ears. How do I create unique  weapons instead of giving my characters just some plain old dagger or pistol?” 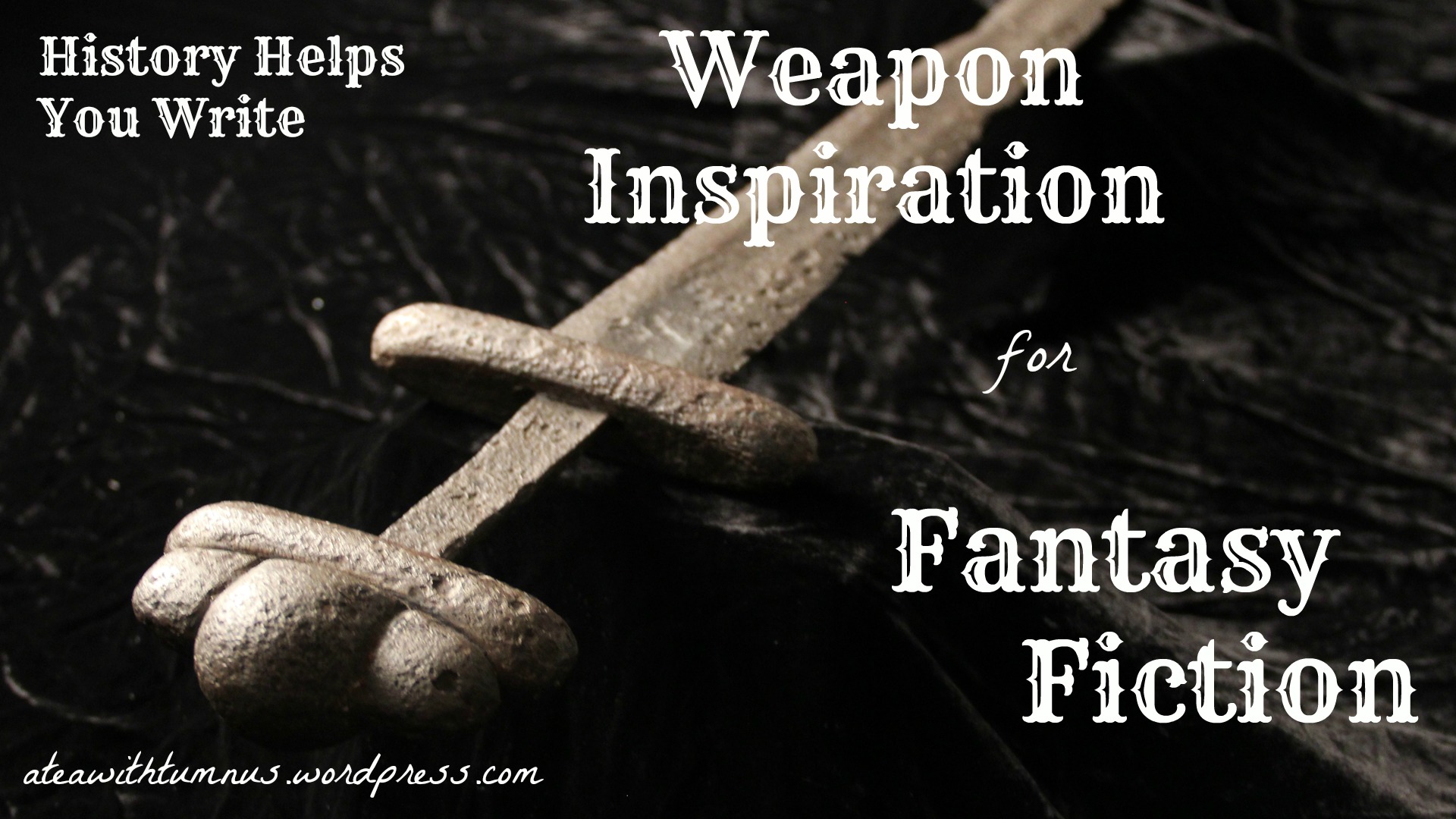 Sound familiar? I’m sure all writers who have dabbled in fantasy fiction have tried to find a solution to this problem. And really, the only solution is (besides get creative), do some research! That way, you can learn about different types and uses of weaponry throughout history and then create your own weapons going off of the interesting facts, but at the same time making them unique somehow, make your mind arsenal stand out from the stereotypes. What are “stereotypes” in this context? I’m thinking Medieval blades. Old-fashioned bows and arrows, daggers, etc. Of course, I’m not saying that the weapons in Lord of the Rings were stereotype, but from my experience, Lord of the Rings definitely started a lot of fantasy stereotypes: from plot to races to weapons. Why? Probably because LOTR was a unique success in its time and Tolkien was among the first to use this type of writing style. Focusing on the weapons in particular, everyone liked LOTR and so everyone wrote their own “versions,”  … thus it became “the thing,” the stereotype, to throw in cool-looking swords, axes, bows and arrows, knives, you name it. And there’s most likely nothing special about them; they’re just … used. What about wands as weapons? An ax that could only be held by the wielder itself? (Here’s an awesome article about the complexity of the genius-created lightsaber.) It shouldn’t be too hard to create unique weapons that leave readers thinking, “Oh, that’s brilliant, I’ve never heard of anything like that before,” or writers like you and me who read and say, “Awesome idea! I hope I don’t end up stealing it.” Hey, if Jason Bourne used a pen and books to kill people and it was awesome, we could come up with anything really and make it an awesome weapon too, do more with it. Don’t be afraid to dream a little bigger, darling.

But today, I want to start simple. In this post, I’m going to start with a sword. Just a plain old sword, nothing special about it yet …

I think a lot of the writing inspiration we get is fueled by history: knights in shining armor, castles, swift-moving samurai or ninjas and their katana, etc. As I’ve mentioned, a lot of the stereotype weapons are basically weapons used throughout history. Even if you’re talking modern times, guns, pistols, .22s, grenades, a lot of what we know about these weapons come from real life. And you can take those real life weapons and UNstereotype them, make them your own, give them a secret, a special hidden power, different combat techniques, maybe even a vital connection between it and its wielder, I don’t know. The point is, we learn from history, and our head knowledge of weapons come from those weapons used throughout history and we can build off of them to create our own, unique, creative weapons for our fantasy writing.

A while ago I watched a PBS documentary called Secrets of the Viking Sword. It caught my eye at the library because it had to do with Vikings and weapons, both of which have fascinated me for a long time. Plus, I could see a lot of good writing material coming. Watching it, I was amazed at how clever these otherwise “barbarous” Vikings were. This special, rare sword they created, called the “Ulfberht,” was no ordinary sword. There was a lot of work that went into making it the strongest sword of its time, and it is still among the strongest swords today. There’s even a story behind the Ulfberht that makes it a legend. A real life legend. Here I’m just going to tell the story of the Ulfberht and what made it unique, for the main purpose of writing ideas. Sounds interesting? Read on.

The Ulfberht is considered one of the greatest swords ever made. It is a very high-tech tool as well as a work of art. And there was only one forger who made the original Ulfberht swords. The secret of how this sword was made was a long kept secret for a millenium. The Vikings did not want to share the secrets of their amazing weapon for the sake of their opponents using that power against them. However, another forger took the Ulfberht and made his own version. Fortunately for the original forger who first created the Ulfberht, however, the bogus forger didn’t know the secret that made the Ulfberht so legendary up to even today. The only way you can tell the fake from the original is the arrangements of the different letters and symbols in the engraving.

So far, the story could make an amazing movie. It’ll be called “The Ulfberht: A True Story” and it’ll make the box office for the fantasy/adventure. (Sorry, my Inspiration Bombs have already hit.)

What does the special engraving mean? (Precisely. You have to write a story and find out.) Besides the fact that it is a Frankish personal name, we can only make guesses as to who or what it was named after. (By the way, the v is actually pronounced as “uh”.) The crosses tell us that the sword was probably named after a priest or a monastery, maybe even forged by a bishop rather than just a brilliant forger. Maybe the name doesn’t mean anything or the name Ulfberht possibly belonged to a great Viking warrior that we don’t know about. More research is needed on this point, but don’t you see here? There’s mystery as to what the engraving really means. Writing material galore, right? A single weapon could shape the whole plot of a story.

Now for the secret that makes the Ulfberht such a legendary weapon, but first you need to know the difference between iron and steel. Steel is a general metal, but iron is the main element. (I’ll use each word off and on here, steel is just a more general term that refers to the sword’s main material.) So, most swords in medieval times were made out of steel, but since it took so long back then just to make one sword, no one really cared to try and extract all the slag. Slag is a name for all the elements and metals in the steel that weakens it, making it much more fragile. This is what makes the Ulfberht so unique. In making this weapon, the forger would take out all the slag, making it the strongest ever made, not only in Scandinavia, but maybe even worldwide. 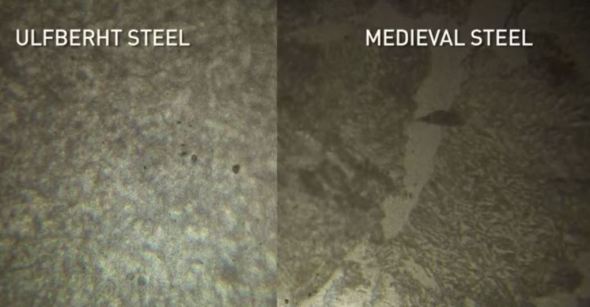 The above picture is comparing two pictures of steel very close up. The one on the left is of the first Ulfberht and on the right is a sword that was not made with crucible steel like the Ulfberht. The long black things in the Medieval steel are the slag. As you can see, the Ulfberht steel on the left has no slag.

How did they remove the slag? The art of making swords in crucible steel probably came from Asia (so, did this “original Viking forger” steal their idea?). Anyhow, the Viking forger who made the Ulfberht knew that making his sword out of crucible steel was the best thing to do if he wanted a good, solid, long-lasting sword. When you make a sword using crucible steel, you have to put in just the right amount of carbon, which, when mixed with the iron, makes the metal super strong. Then the block of steel is sealed up and put in a charcoal forge, which is sealed up around it. Heating the steel in the crucible helps to separate the unwanted metals such as phosphorus and sulfur. Those elements make the steel brittle. When it is done being heated in the forge, the steel is taken out and the sealant is cracked open, and all the slag just falls off the steel, leaving pure, dense iron.

On a side note: In the video I watched, I got to see a master swordmaker, Richard Furrer, actually recreate the Ulfberht, using the forge and materials that would have been used to make the Ulfberht in the Viking Age. He is one out of only a few people who have the skills needed to recreate the Ulfberht the original way. If you replaced that sword maker with a Viking forger, it would seem like you were transported back into time because everything that was put into remaking the Ulfberht was exactly the same way the Viking forger made the original Ulfberht. You cannot beat that.

When Furrer had finished it, he was looking at the first Ulfberht ever made the original way in 900 to 1,000 years. It is a very lightweight, efficient, and stable sword. It is amazingly strong and flexible. Its edges are not sharp, but it takes more skill and dynamics than just clash-clash and pointy ends to successfully use the Ulfberht in hand-to-hand combat. The blade’s iron is equal to the quality of almost modern steel, just like its original. And it was made centuries and centuries ago! Amazing.

So you see, we writers can learn a lot about the magic of weaponry even from weapons made hundreds of years ago. The Ulfberht is a perfect picture of a mysterious, legendary sword, and its story, as told above, could really help spark some inspiration and ideas for creating weapons that really stand out in our fantasy stories. It helped me with ideas; what about you? Has this inspired you at all? Do you know any interesting stories about not only historical weapons but historical events or people that has helped you in your writing? Any cool weapon ideas? Let the creative ideas flow. Good writing to you.

One response to “History Helps You Write: Weapon Inspiration for Fantasy Fiction”