Things have shifted crazily with writing this past year. As most of you know, my NaNoWriMo 2016 novel Fiction’s Lie is on the way to indie publication through Amazon’s Createspace, but there’s a lot of other projects going on as I type. I’ve developed new worlds and characters, rewrote some fanfiction, stressed out over Camp NaNoWriMo, and jumped back into my main project, Netherworld.

As indie publication looms brightly on the horizon, I’ve started getting a little frightened with the fact that pretty soon, I’m going to have to put together deadlines and release dates and post schedules for marketing. Which means lots of organization and planning, which is why I aspire to be a time lord or invent a way to create clones of myself. If only, right?

So, without further ado, here are some highlights of my writing world, as well as a very exciting announcement. The announcement? *accentuated advertiser’s voice* Read more to find out. (Or look at the blog post’s title.) 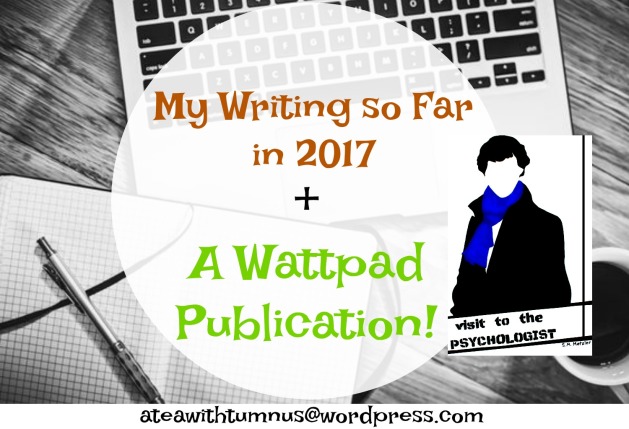 This contemporary/drama/fantasy novel probably has received most of my attention, having been written as 50K words in 30 days. You can imagine all the editing that needed (and still needs) to take place. It’s still in the works, and after I apply feedback from a few friends and family members, I’ll post asking for any beta readers to raise their hands. In fact, if any of you have had experience with beta readers and have some tips or words of caution for me, I would love to get some advice. You can easily comment on this post or DM me through Twitter. I might be able to pull it off freestyle (like that’s going to go well) but I’m probably going to need all the help I can get.

The title itself is a work in progress. This is my oldest baby, and the story idea and characters were born around four or five years ago. Over that time, I have 1) rewritten it three times (it’s going to need a fourth), 2) come up with too much backstory that forced me to divide it into a Part 1 and 2, and 3) written up a 30-page outline, chock full of chapter/plot/character details to remind myself of what exactly I’m writing. My adventure with Netherworld has been awesome; since it’s been in the works for years, I’ve developed it probably way more than I should have, which makes it all the more exciting and challenging and full of feels that ends up in me fangirling over my own story. Cue embarrassed smirk.

Right now, I’m rewriting my outline. I’m changing up a lot of things and reminding myself of major plot points and backstories since soon I’m going to start working on it again. NaNoWriMo last year forced me to put Netherworld on the backburner for a while so that I could write Fiction’s Lie. I needed the break, but wasn’t expecting it’d be this long. Needless to say, I’m very excited to start working on it again.

3. Squid and the Girl of Sanducy

I developed this story idea a few months ago and I got so excited about it I wrote a whole outline and created a Pinterest board for it. I fell in love with the plot, the setting, and the characters and I couldn’t wait to start writing it. When CampNaNoWriMo approached, I had the perfect opportunity. For some odd reason, though, my enthusiasm for Squid and the Girl of Sanducy went down the drain on the first day of camp. I’d love to call it writer’s block, but I think I was afraid of not making it “good enough.” (I’d like to point my finger at worldbuilding.) But I made myself start and even though it’s far from perfect, I’m on a roll. Gotta keep reminding myself that it’s only a first draft. #GetOutofEditingMode. After all, it has lots of promise and potential for a fun, light-hearted fantasy adventure with Hunger Games and How to Train Your Dragon vibes (minus the foul humor and endless violence).

4. I Published Something on Wattpad…A Visit to the Psychologist: A Sherlock Fanfiction Story

Now for the “very exciting” announcement! I have posted a short story on Wattpad. I just recently picked up a Sherlock fanfiction short I wrote two years ago and decided to edit it. It turned into a rewriting project, and I saw it as potential for a Wattpad publication. I’ve been wanting to post some of my writing on there for some time now; I’ve enjoyed reading other writers’ stories on there and I like the system of direct feedback and engaging between authors and readers. I think Wattpad could be an excellent alternative to indie publishing, depending on where you want to go with your story.

There is no case. Sherlock is bored. And the wall just downgraded another hole.

Only three days has passed since Doctor John Watson moved into the flat with Sherlock Holmes, and hearing the gunshots is the last straw. Feeling genuinely concerned about the sanity of his roommate, he suggests that Sherlock visit the psychologist for once. Sherlock agrees reluctantly, knowing that nothing will help him except for a case. But in the end, it’s Sherlock Holmes having fun bamboozling the psychologist with his skills in deduction, a turn in events that lifts the spirits of the caseless detective.

My sister Renee, a very talented artist, drew the cover, based on some clip art I wanted her to follow, and I love it very much. I count myself a lucky writer with a sibling who will make amazing cover art for cheap.

The views are accumulating. Each new view it gets, I get more excited because the number increase means another soul read my writing without my permission or stealing my drafts to read behind a locked door. That’s because I published something. Maybe not traditionally or officially, but I put a story I’ve slaved over out there with my name under it.

If you have some stories on Wattpad, by all means, enlighten me about them! I am on the lookout for some good authors and stories on there.

How is your writing going? Are you participating in July’s CampNaNoWriMo? And how goes that? Any advice on having beta readers? How do you manage working on multiple stories simultaneously? After all, I need people of intelligence on this sort of mission … quest … thing. Best of luck to all your writers out there. Allons-y!