Today, I’m picking up where I left off in last week’s post, Part 1 of my music video analysis of Twenty Øne Piløts’s song “Jumpsuit.” Which would be about at 2:15 in the music video itself:

Their new song “Levitate” was just recently released, and as far as we know, it is the third and last video of a three-part story that is seen clearly throughout “Jumpsuit” and “Nico and the Niners.” In Part 1, I gave some needed context about the Dema storyline which explains everything that happens in their earlier music videos and their new Trench videos, including Jumpsuit. In order to understand the context of this interpretation, check out the updated Dema explanation in my Part 1 post, or watch this brilliant video (brilliant, yes, but has some profanity). But, picking up from where we left off in the music video, Tyler (or Clancy) has found himself in a ravine receiving stares from some a shady-looking group up on the cliffs—who are actually members of his rebellion that escaped back at Dema— and is encountering Nico, A.K.A. Blurryface on a white horse. The last thing I talked about was how Tyler seems to be either giving into the protection he trusts that his jumpsuit will provide him or is under a trance that Nico puts him under as he gallops toward him (which, according to the theories presented in the video about the Dema storyline, seems to be the most accurate).

Right now, Nico is headed straight at Tyler, but stops about a dozen feet away from him. We then get a close-up of Nico’s face which is, indeed, blurred by a translucent veil. I didn’t notice this detail until watching it again just a few seconds ago that the lower half of his face is black and the upper half is chalk white—you can see it better once he dismounts after a couple wide-angle jumpcuts of him approaching Tyler.  Nico then stretches out white hands and leaves black smears on Tyler’s neck. If this isn’t a harken back to the Blurryface era, then the sun doesn’t set in the west. If you’ll remember, Blurryface is a fictional character Tyler created to help himself confront his fears and insecurities; in a way, Blurryface is the embodiment of his demons. Throughout the Blurryface album, he invades Tyler’s music and is presented as a blurry, unidentified, human form, and we finally get to see Blurryface in the video. Instead of the Blurryface we knew from their last album, however, he is Nico, one of the nine bishops of Dema, and the one who Tyler fears the most. During concerts back in the day, Tyler would paint his neck and hands black, as if literally becoming his securities as a way to confront them. Leaving black paint marks on Tyler’s neck is Nico’s Step 1 of reassuming control and luring him into hopelessness and submission to fear again, in order to bring him back to Dema.

We then get a split-second flash of a vulture. At this point in Jumpsuit, we can only lean on theories about this vulture and what it’s supposed to signify or represent, but we see a lot more of it in the Levitate music video. Perhaps it’s merely a glimpse into the future, into Part III of the story.

Tyler follows Nico (“I’ll be right there / But you’ll have to grab my throat and lift me in the air / If you need anyone”). These lyrics may imply that Tyler/Clancy can’t fight against the power of Nico and Dema, but that he won’t go down without a fight.

(“I’ll stop my plans / But you’ll have to tie me down and then break both my hands / if you need anyone.”) Okay, so notice that Tyler references his throat and his hands—”grab my throat,” “break both my hands.” Tyler makes his art with his throat (singing) and his hands (playing instruments), and in a way, he’s basically telling Nico that as long as he can still make music (which is his way of staying alive and helping others to see hope in staying alive, by the way), he won’t submit to Nico and Dema. And it’s no coincidence that it’s his hands and his neck that have been painted black in the past—he won’t let Nico, or Blurryface, control what he writes songs about or what he does with his hands (a reference to the song “Lane Boy”).

At 2:50, we get a close-up of Tyler. His WHOLE neck is black, compared to the black fingerprints Nico gave him before, so the trance he’s under is working; he’s under control of Dema again at the moment. 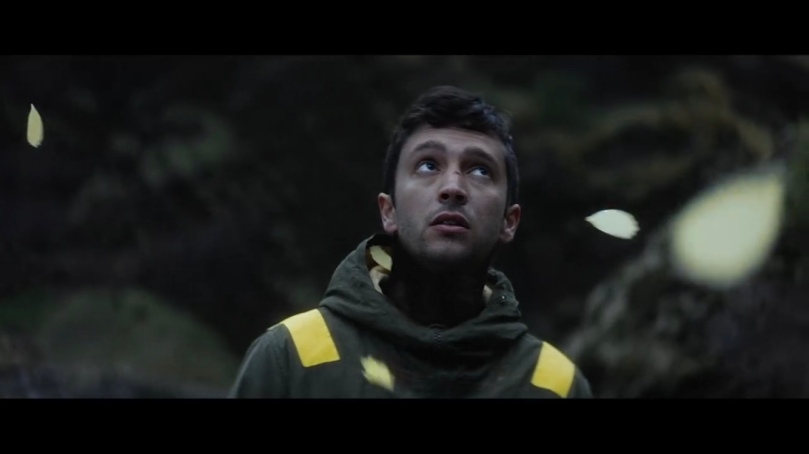 Tyler sings this bridge again, but he stops following Nico when he notices flowers on the ground. They’re yellow—the color of Trench—and apparently a color that the bishops of Dema hate. The Dema escapees at the top of the cliff send down yellow flower petals. The following shots show Nico and Tyler surrounded by the falling petals and several things happen here all at once: 1) Notice that Tyler’s neck, once completely black, begins to fade away, and so is Dema’s control. 2) Nico’s horse becomes irritated, and Nico fights to steady it, while the yellow fights the trance Tyler is in and helps him to recognize the situation and take action.

Here’s some really pretty shots from this redeeming scene: 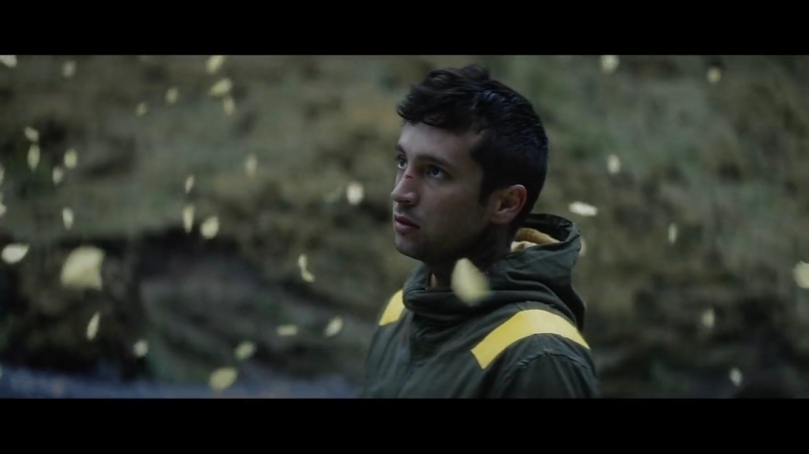 We approach the crescendo of the song, and the climax of the story (“I can’t believe how much I hate / pressures of a new place roll my way / jumpsuit, jumpsuit, cover me / oh jumpsuit, jumpsuit, cover me”), and Tyler, breaking from his trance, realizes that he’s not alone; the rebels on the cliff are throwing down yellow flower petals to free him and provide an irritating distraction for Nico. Tyler notices his moment of Nico’s weakness and jumps on the opportunity; he turns and runs, screaming, “JUMPSUIT, JUMPSUIT, COVER ME.” The petals stop falling and Nico eventually gets a hold of himself; he chases after Tyler. 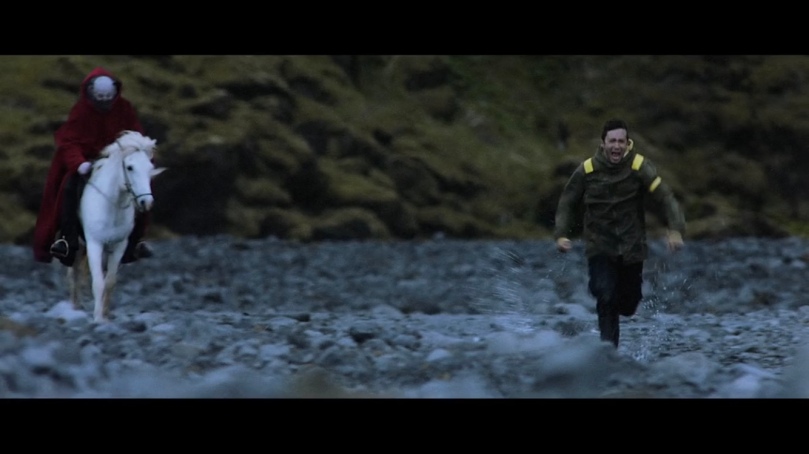 Tyler trips and falls, surrendering to Nico yet again, and in a shot viewed from Josh’s perspective, we see Nico standing over Clancy, triumphant. 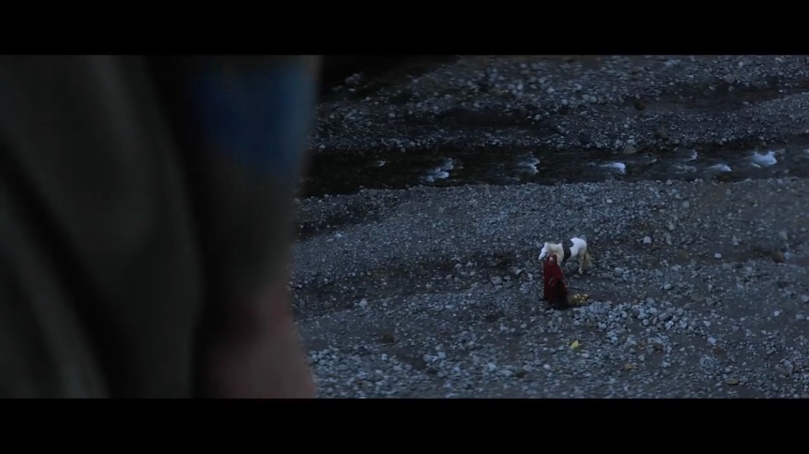 The next shot is a long one, and this is where the video, and the song, ends. Tyler takes his jumpsuit out of the hood of the car—completely untouched by the fire, possibly a representation of the seemingly invincible durability of his jumpsuit—and walks off in a direction…rumored to be east.

And the words “East is up” is the first lyrics of the next song and music video, “Nico and the Niners,” which picks up the Dema storyline from where Jumpsuit left off.

So there you have it!! I’m really excited about this newfound Dema storyline and how the video I earlier linked to explains how it connects the Blurryface and Trench music videos together. There’s a whole story underlining Twenty Øne Piløts’s seemingly nonsensical music videos, and that’s not even touching on what the lyrics in the song actually mean. I don’t write song or music video interpretations very often, but for me it’s very similar to analyzing a book. I’m still analyzing a story, but in the form of music and film. I loved learning more about this fictional universe Tyler created and seeing it play out in this Jumpsuit music video. What do you think of these theories? What’s your interpretation of “Jumpsuit” and its music video? Comment below with your thoughts!