Last week’s post looked at worldbuilding in general and why it’s so important to have a well-developed setting as it is the foundation on which the story is built. It’s critical to have well-rounded, convincing characters, and it’s just as critical to have a developed, convincing world.  Today’s post is digging in more to take a look at the important aspects and details of worldbuilding that deserve consideration and can tend to get overlooked. 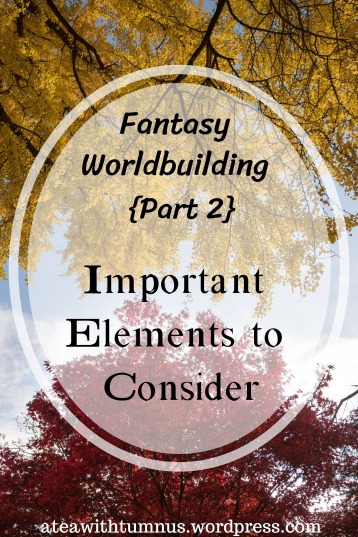 A while ago, I sent out a tweet asking people what some of their favorite worldbuilding aspects were and which ones they thought tend to get overlooked. This resulted in a thread of replies with great points, a couple of which may have found their way into this post.

So, here are some aspects of worldbuilding that may be very worth your time considering when developing your setting.

1. take a look around

The best place to start out is probably the last place we want to: With our own Earth. But where else are you going to look to for inspiration? Our world may seem boring and mundane compared to the plans you have for your fictional world, but that’s probably because you’re a blind native to Earth. Take a step back and acknowledge all the different cultures, landscapes, people, food, species, religions, technology, intelligence, communication, ocean depths––heck, we know more about the moon than we do about the much closer world underwater. Call me optimistic, but I will go so far as to say that Earth is incredible and fascinating and astoundingly beautiful, we humans included. Pssh. Like I’m trying to convince you. Take a hike.

Great fantasy and sci-fi writers look at Earth when they’re developing a world for their novel and apply their own creative genius––and very possibly inspiration from other great writers. If you’re building a world, and you’re stumped, look at what the greatest Creator made for the best source of inspiration out there.

2. consider the co-existence of religion and government

I clump both religion and government together because both things co-exist whether in harmony or opposition. Religion is a great place to start, because before governments, people looked up to a higher power. Most of the time, religion also organizes. It creates rules and regulations. And then people began wanting power and thus government was birthed. Looking back on the history of our Earth, religion and human ties with the supernatural existed before people set up governments based on the rules and regulations they found in their religion. In your world, consider religion and government: how they exist separate from one another, and how they exist together. Are the religious authorities in your world the head of the government? Or does the head of your government abhor religion? Why? The relationship between the two can be vastly complex. These two parts of worldbuilding affect most, if not all, aspects of the culture and people of your world. It affects human behavior, which in turn affects your world and what happens in the world your characters live in.

I’m going to be brief: cut out the cheese and bread and apples already. Our poor fantasy characters are getting sick of this travel food. Plus, that stuff is Earth food. Be creative! Come up with all different kinds of foods! Give them different names! It’s so much fun! The European medieval diet is classic, but when it comes to speculative fiction, there are no limits to the imagination. Look at traditional dishes from different countries for inspiration. What is your world’s version of grain? How do they grow their food, if grown at all? If food isn’t grown, then where the heck is it from? We want to know. What is the cuisine like, the recipes, the restaurants? The drinks? Sweet, salty, bland? Who makes the food? Who sells the food? Where can food be found and how important of a role does it play in traditional culture? There are no limits to all the different kinds of dishes you can make up and how they originated, how they’re sold, how they’re eaten, etc. Coming up with just one partiuclar kind of dish can open up so much opportunity to explore its history and therefore the history of that world’s culture. Every aspect of worldbuilding affects and is affected by every other aspect.

4. think of animals, races, and species

This is where you can really let your creativity run wild. Aliens, otherworldly creatures, and various species of humanoids are one of my favorite things about worldbuilding. I love reading about worlds where strange things lurk in the forest so different from our wolves and owls. I love reading about all the different kinds of fantastical creatures and droids and dragons and races of men/eleves. I also don’t mean to badtalk dwarves and elves, but it’s all been seen before. C. S. Lewis and Tolkien made man/elf/dwarf races popular in fantasy fiction, but coming up with different races and species of men adds more depth and diversity to your world, and opportunity to develop different religions, cultures, and ways of life.

Besides the basic grammar and arithmetic, what do your science classes involve? What are the major courses of study? What do they learn in history classes? How does the school system work, and around what age are people typically done with their education? Does your world focus on intelligence and literacy and scholarly status, or is it centered around topics such as art and critical thinking and debate? Are there universities specifically for learning magical skills? Which leads me to the sixth one …

If you’re going to have a magical system, it needs to have a coherent logical set-up. Ask yourself lots of questions, such as: Can people with disabilities have powers or use magic and why or why not? (Hint: they really should.) What are the limitations to using magic or powers? Where did this magic or power originate from? Can anyone use it? Is there a certain set of skills one must attain before even beginning to learn how to use the magic? Can this type of magic go hand in hand with science, or do the two vastly contradict each other? Has magic and powers been going on for centuries, or is it newly discovered? How does its use and those who use it affect the world and the culture at large?

Technology is something else that can go hand in hand with magic or have a completely different role in the world aside from magic and super powers. Technology has vastly impacted our own culture and society and individual everyday lives just as much as it has impacted communication and the marketplace and pretty much literally anything else from relationships to religion, from food prep to education. Technology, whether old-fashioned as in carts and wagons or advanced as in holograms and hover cars, has a great impact on the world and its people. How is technology used everyday, and how does it unite or divide people? What does technology development look like, and are people for or against it? How has it changed life in the past? Take a look at how technology has changed our society on Earth and weigh the pros and cons to get an idea of how technology originated and impacted your world, for good or for worse.

7. give the people in your world conflicting opinions

We have so much of this in our societies on Earth, and one of the main things that makes a world so diverse and colorful and unique is the people who live there and what they have to say about the place they live and their role as a counterpart in their society. Unless your inhabitants are brainwashed (which sounds like a cool idea for another story for another time), they should have various views based on politics, religion, the educational system, technology, how they view a magic system if there is one, etc. How do different cultures get along or not get along? Have there been any wars in the past, what caused those wars, and how have those wars changed society to the present day? How do people with different tastes, views, and opinions get along with each other, and is there a system for it? As far as cultures go, what is and what is not allowed? What would be viewed as acceptable and polite or rude and inappropriate, and how would the citizens agree or disagree with such cultural regulations? And, just as importantly, how do your characters feel about the world? How do each of their different backgrounds reflect their view of the world and what they do and how they interact with it?

Now I know I had a lot to say about worldbuilding, but note this: What are some of your favorite things to see in worldbuilding? What aspects do you think are important and yet overlooked often? What are some books you’ve read that have done really well with worldbuilding and are good sources of worldbuilding tips and inspiration? I want to know what you guys think! Thanks for reading!

One thought on “Fantasy Worldbuilding Part 2: 7 Important Elements to Consider”